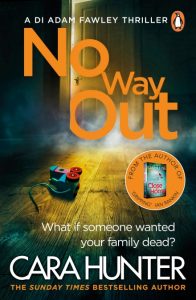 No Way Out is the third book in Cara Hunter’s brilliant DI Adam Fawley thriller series and it’s been creeping up my #TBR list all summer.

It was worth the wait and Fawley fans will not be disappointed. It’s New Year 2018 and we return to Oxford where Thames Valley Police are tasked with investigating a devastating house fire that has claimed the lives of several family members, including two small children.

With Quinn disgraced and demoted, DI Fawley is ably supported by DS Gislingham (Gis), while DCs Somer and Everett make a welcome return to complete the male/female dynamic.

From the outset, there are too many questions and no forthcoming answers, but one thing’s for sure; the fire was no accident and the deaths look like murder.

Running alongside the crime, we see Fawley struggling with his own demons – namely the recent and painful disintegration of his marriage. This adds a layer of poignancy as wife Alex floats, spectre-like, in and out of Fawley’s life – in an almost dreamlike way that was very intriguing.

During the first half, I found this book a little harder to grip than the author’s first two volumes; simply because I didn’t know who I was rooting for within the Esmond family. Later however, several cracking twists emerge which pick up the pace and make for a twisty second half and a shocking and very satisfying ending.

The combination of the authentic, relatable investigating team mixed with the intricate plot, makes for another gripping read as Cara Hunter serves up just enough familiarity but with a collection of thrilling new twists. 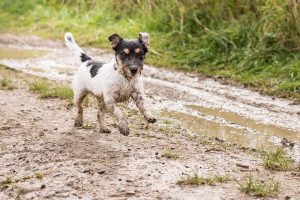 Dog stands by the door, feet planted, tail still
While I put on wellingtons and a mac
Dog’s eyes say: ‘Terriers hate rain; don’t you know nuffink?’
Collar and lead on, we set out
Past the village store, open all hours
Past the house with the broken gate
Where lives a woman with a broken heart
Past the post box, unleashing love and hope
And bills (but nobody wants those)
And to the footpath, muddied and brown
Passsing through fields of overripe wheat
Looking up I feel the kiss of clouds
As rain, fine as sea spray
Mists my nose, cheeks and eyelids
Field after field, until dog and I are bound for home
Each wetter than a paper boat 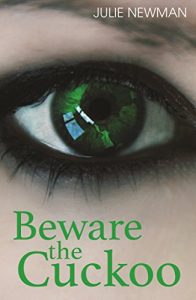 Blurb: They were reunited at his funeral, school friends with a shared past. A past that is anything but straightforward. A past that harbours secrets and untruths.

Karen has a seemingly perfect life. An adoring husband, two wonderful children and a beautiful home. She has all she has ever wanted, living the dream. She also has a secret.

Sandra’s once perfect life is rapidly unravelling. The man who meant everything to her had a dark side and her business is failing. To get her life back on track she needs to reclaim what is rightfully hers. She knows the secret.

As the past meets the present, truths are revealed – and both women understand the true cost of betrayal.

Review : In this dark thriller, Julie Newman skilfully weaves a tale of intrigue and suspense. The narrative spans several decades, mainly the recent past and the seventies, and the key characters are three schoolgirls and one sinister and wealthy businessman.

Overall, ‘Beware the Cuckoo’ is the story of one woman’s struggle to outrun a lifetime of misery and abuse at the hands of not only a male perpetrator but a bullying and monstrous woman. To say much more would spoil the plot, but at the mid-way point, there’s a subtle shift in tone as we focus more on the recent past and themes of blackmail, financial skulduggery and revenge smoulder throughout the action.

I found the character of Karen terribly sad and her story a tough read in places, particularly some of the detailed descriptions of her abuse at the hands of Bill.  There are no laughs in this book, but if you like a twisty and unpredictable read, you’ll get much out of this novel and I’m looking forward to reading other novels by Ms Newman.

Beware the Cuckoo – OUT NOW