6 responses to “RIP darling Rodney; you were our son and our sun” 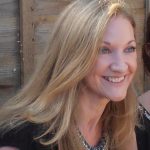 If you’ve written a novel, you’ve probably played ‘who would I cast in...
Scroll to top