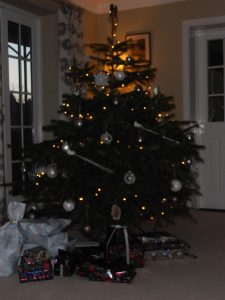 For Christians Advent is a significant time of anticipation and preparation as we draw close to the birthday of Jesus Christ.

For the rest of us, it can mean panic stations as we realise just how close Christmas (and all the madness it entails) really is.  I wish I could say I was one of those clever people who have bought and wrapped all their presents, written and posted cards and ordered in an array of delicious Christmas food by December 1st.  Personally, I’m a ‘leave it all to the last minute’ kinda gal.  I’m not proud of it, just disorganised.

And as for decorations, I love them, but a beautiful real tree usually goes up in our house about a week before Christmas Day.  Not so the goodly people of the new town in Kent where I live.  I am astonished by the number of houses that have been sporting full Christmas regalia since mid-November.

I’ve lived in this area for almost ten years and I cannot remember Christmas ever starting so early.  Is it because it has been a truly dreadful year in terms of loss of life due to acts of terrorism in the UK?  Has the misery of Brexit played a part in wishful escapism?  Are we all totally Trumped-out?

Perhaps many of us simply long for some magic and sparkle (in addition to the Markle variety) to help cheer us up after such a difficult year.  Personally, I think putting a Christmas tree up so early is daft.  I say this mainly from a practical point of view.  Surely any real tree (with the exception of eco-friendly potted and still-growing ones) would be bald and listing by Christmas Day.  Just sayin’.

I smiled to myself when I spotted neighbouring houses all festively lit up two weeks ago.  It’s a poorly kept secret that my novel Seeking Eden was inspired by the community I live in and I was reminded of these two short passages, about two very different Christmases…

Christmas came early in Eden Hill.  By the first week in December at least one house in every street was bedecked with fairy lights; it was fast gaining a reputation as ‘nappy valley’ and pester-power had a lot to answer for.

Any evidence of festive spirit only depressed Martin as he contemplated Christmas alone.  It was incredible the speed with which his life had derailed.  Jan showed no sign of returning, preferring (absurdly, in his view) to stay with her brother at his bleak seaside bunker.

Hayley and Simon had patched things up (to a degree, there was still no evidence of a ring on her finger) and they’d mooted going to Tenerife for the holidays.

Martin shook his head; focus.  Melancholy was slowing him down and he was already running late for his meeting at the Farleigh house.  Parking directly outside, he walked up the path and rang the bell.  A dog barked.  Perhaps he should get a pet – at least a dog wouldn’t up and leave on a whim…

On Saturday afternoon, Ben had taken Lisa to a reindeer farm.  It was for kids, but she’d been ridiculously excited, rubbing the animals’ fuzzy noses and feeding them carrot sticks from her pockets.  Ben had feigned cynicism, but she saw through it; he was even more of a big-kid than she was.

The next day, they’d gone in search of a Christmas tree and after ten minutes in the car, they’d pulled into a layby off the A20, where a twenty stone man dressed as an elf was selling a selection of beautiful pines ranging from deepest bottle green to a dusty blue.

Picking a six-footer, it was a miracle they managed to get the tree home without being stopped by the Police as it skewered the length of Ben’s car, its spiny tip bent out of the passenger window.   Lisa howled with laughter all the way home, imagining the spectacle.

Then they’d put on Christmas Carols and decorated the scented pine, drinking mulled wine and eating nuts and Twiglets.

‘Pinch me,’ Lisa said puckering up for a kiss.

‘Are you happy, baby?’ Ben said, with that languid sexy smile of his that reliably turned her spine to jelly.