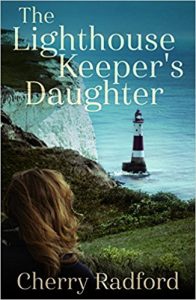 The Lighthouse Keeper’s Daughter is the third novel by Sussex writer Cherry Radford but an enjoyable first for me. I did not know what to expect but was initially attracted by the excellent reviews. The title may have a ring of historical romance to it, but I’m delighted to say that LHKD is a contemporary tale set against a backdrop of social media, long-distance love and secrets from the past.

Set in East Sussex and Madrid, the story centres on Imogen, who is exiled in a relative’s lighthouse, where she’s gone to lick her wounds after a painful divorce – and Santi, a beautiful and talented Flamenco guitarist, soap-star and would-be serious actor whom she meets online. We see their relationship develop, from it’s tentative, spiky inception on Twitter to it’s moving conclusion almost a year later. The two initially develop an online friendship, but things move up a gear when Santi finds himself in the running for the lead role in a high-profile movie – and needs to improve his English, fast. Enter Imogen, who with the benefit of good, general Spanish becomes Santi’s teacher.

Early on, much is made of the language barrier – and some oops moments guaranteed to make readers smile. But there’s more to LHKD than international romance and the well-drawn, authentic landscapes of Beachy Head and Madrid, and mystery lovers will appreciate the beautifully dovetailed second tier of the novel: the disappearance of Imogen’s father, the lighthouse keeper, who drowned when she was a child. Presented with a drip-feed of her father’s diaries by her aunt, Imogen finally unveils the shocking truth about his disappearance.

LHKD is engrossing and elegantly written. I preferred the chapters set in Madrid and particularly loved the character of Santi (and having lived in Spain for a year in my youth, I could hear his voice perfectly). There were times when I questioned why such a fabulous stallion of a man, with his pick of Spanish MAWs would be interested in the fragile, ‘melocoton-haired’ English mare; but it is Imogen’s very novelty that initially attracts, and eventually mellows and matures Santi.

Readers who like a quirky, romantic thriller will not be disappointed.