When I was 28, I wrote my first novel.  It was garbage, littered with clichés, adverbs and flowery similes. I printed one copy, then put it away – in the round filing cabinet that lives under my desk.

Roll forward twenty four years and I had another stab at it.  This one was better, but abandoned at the 45,000 words mark as the plot was weak and it ran out of steam.  ‘How come everyone’s written a book, if it’s this difficult?’ I thought.

The following year, I started a third.  And stuck with it – a 90,000 word contemporary women’s fiction novel called ‘Beginner’s Guide to Burb Watching’.  It took another year to edit and polish, and to find a publisher who liked it enough to back an unknown author.

Remarkably (to me at least), with the new moniker of Seeking Eden and a cover I never tire of looking at, that book is due for publication on 6th July. It’s very exciting, and it makes me smile to think of people being entertained or otherwise affected by something that formerly dwelt only in my imagination.

People keep congratulating me – which is lovely and I’m thankful.  But writing is a funny thing; it messes with your head.

When I started writing Seeking Eden, I thought: If I can just get to the end of this one, I’ll feel I’ve succeeded.  Once that was achieved, honing and polishing my rough manuscript became an ambition in itself.  And then I wanted to publish; to share my work with readers – which is kind of the point, isn’t it?

I was overjoyed when independent publisher Urbane offered to release Seeking Eden; at last, success was within my grasp!  Then like a shimmering mirage, as I walked towards it, success moved away, always ahead, warm and tantalising.  Now I see that writing a novel and even publishing one is not the Holy Grail.

So, new day, new objectives; now I want people to buy it, like it, and say nice things about it.  So when does writing a book begin to feel like a success?  Perhaps (dare to dream) when I’ve sold a few thousand copies?  Then again, knowing me, I’d want Seeking Eden made into a film or a three part BBC drama, with a stellar cast.  Some people are never happy!

Sincere thanks for all the wonderful support from friends and family and from my fellow Urbane authors – you are too kind and I am very grateful.

I was recently emailed by a lady asking if I still had my terrier cross, Brodie.  She’d read my rather bleak post in February, shortly after I’d rescued him from the amazing Foal Farm in Kent, and after tuning in to my website at regular intervals and finding no further posts on the subject, had concluded that I’d given him up for adoption. 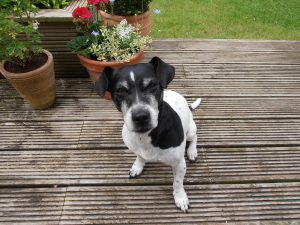 Firstly, apologies to any other dog lovers who may have been concerned about Brodie’s wellbeing.   Happily, I can report that far from returning him to Foal (or any other responsible rehoming centre), Brodie has settled down brilliantly and is a very happy boy.

I’d be lying if I said we had cured his dog aggression; Brodie is five years old and this kind of behavioural problem is not something that can be sorted overnight.  There are no quick fixes – and god alone knows what this poor dog has endured in his past that makes him regard every dog he meets with fear and loathing.

But we are seeing real progress, thanks to the dedication and support of Peter Williams, a former police dog handler and trainer, whom Brodie adores and responds to brilliantly.

In training sessions, Peter has Brodie running free and off-lead with several of his own dogs; four at the last count, and sized from a German Shepherd to a Jack Russell.  Brodie is completely chilled in their company, without even a hint of fear or aggression.  Of course, what he is responding to, is Peter’s natural authority and calming aura.

After such wonderful progress in a relatively short space of time, I am hopeful that Brodie’s confidence with his trainer begins to ripple out to me so that I can walk him off lead, without worrying about the safety of other dogs.

But we are not there yet.  Dog walkers; if you see me walking Brodie, on a short lead, and he’s wearing a bright yellow bandana that says: ‘space needed’, please accept that this is not a fashion statement or a gimmick.  Please help by putting your dog on a lead, too – or by reigning in a Flexi as you pass by.  I love ALL dogs and will do all I can to keep everyone’s fur-babies safe, but please – meet me half way.

RT @A_AMilne: "Lying in bed with the lights out, I had to remind myself that the dragon was only a bedtime story one, not a real one. I had…
h J R
@BevHarvey_

RT @mandybaggot: Want to get away but staying home and saving lives? ✈️ 🏡 Let me take you to Corfu! Becky's longing for sun, sea and chill…
h J R
Follow @BevHarvey_